Imagine a series of castles made of chocolate. And when you chomp it, it just grows back. Now imagine some lemming-type characters as well. You've just imagined this game.

Packing case world has got some cases in the background.
HATCHETTING A PLOT 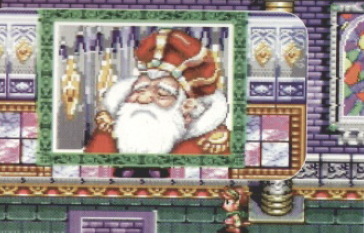 The game starts like an RPG. The little characters rush though a castle to see the king. He talks to them in Japanese and they rush off to do his bidding. They pile through the castle for ages to get to a well. They drop down it and into the levels.
Some games, like Tetris battle Gaiden and Super puyo Puyo get away with characters, text and weird plotlines, but in Loderunner Twin it just aggravates matters and makes you wonder why they bothered putting it in. It's not even as if RPG addicts will snap up the game because it's got a vaguely RPG-looking intro; they've got more nous than that.

GOOD, BAD OR UGLY?
What makes a good puzzle game? It's got to be simple to play, yet tricky to beat. It's got to be exciting, involvind a element of panic and it's got to give you a lot of freedom to play it your way.

Loderunner Twin has got bags of the first two ingredients, but falls down on the last. Let's find out why. The idea in the game is that you rush around a series of platforms connected by ladders, collecting sweets, presents or whatever. Once you've collected them all, you can escape up a ladder to the next level.

Creatures which look suspiciously like lemmings are chasing you around. If they catch you, you're dead. You can't shoot or jump on them, so the only options open are to run away or to dig a temporary hole in the platform and hope they fall in.

So this is what you do. You lure the lemmings to a large platform, then run away, digging a series of holes for them to fall into. If the holes close up with a lemming in them, it dies (and is reborn at the top of the screen a bit later).

Having got all the lemmings down at the bottom of the screen, you rush around, collect all the gifts and then hare up the ladder. And that's another level completed.

There are fifty of these levels, so obviously some are much hardoer than others, but the above principle can be applied to them all with general success. And it's this narrowness which spoils Loderunner Twin.

On the plus side, though, the two-player option is a much better bet. There's a split-screen, and you can work as a team to lure the lemmings around, and into your cunning traps. With two players, the game just starts to get interesting. But sadly this isn't enough to get it onto your top games list. Nor is the tedious plot nonsense which surrounds the puzzly bit.

Verdict: Not flexible enough to be a real puzzler, Loderunner Twin is more like Mario and Wario meets Donkey Kong. But not as much fun as either. Two-player mode is alright, though: