Just so there's no confusion, what we've got here is Tony Hawk's Pro Skater 4 with simplified controls and Disney characters. Hang on a minute -keep reading.

This might not be the most thrilling premise for a game, but it's actually quite good. Particularly if you're young (or old) enough to have found the Pro Skater titles thumb-twistingly difficult.

The action is basically identical to the familiar Tony Hawk gameplay, except with a far more forgiving control scheme. Balancing is easier, you use fewer buttons and you can string together stunt combos without having perfect timing. Cranking up the difficulty level makes it a bit more of a challenge, but it's never as tough as the real thing.

The authentic Disney look is the best thing about the game, with characters from Toy Story, Tarzan and The Lion King (many of them voiced by the original actors) skating around levels based on the movies.

Characters can only be used in their own specific levels, for some bizarre reason, so you can't see what Buzz Lightyear would look like in a jungle setting. Just in case you wanted to.

The only skaters who can go everywhere in the game are the ones you design yourself in the character creation mode. These big-headed kids can be designed from the trainers up, or you can choose one based on a handful of existing children who are, apparently, real people digitised by Activision's talent scouts.

If you've played Tony Hawk's before, you'll have experienced almost everything this game has to offer, bar the graphics.

That's not to say that younger players, or the young at heart, won't find plenty to enjoy here. Pro Skater is for the pro gamers, but your little brother or your gran might get a kick out of Extreme Skate Adventure. 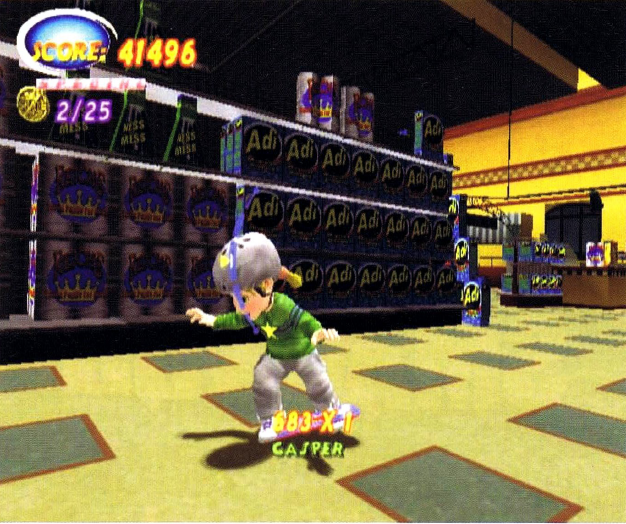 Good, wholesome fun in the supermarket. Of course, if you tired this in a real supermarket, the security staff would be well within their rights to forcibly 'Casper' your skateboard into your half-pipe. Sideways.

-
A bit simplistic for experienced players.
Yet another skateboard game.

Verdict: Tony Hawk rides again, wearing a Buzz Lightyear gimpsuit. It's the skateboarding game for anyone who finds the trickier ones too Frustrating.