GameInfo: A groundbreaking, uber-popular game upon its arcade debut in 1987, Double Dragon is the undisputed godfather of co-op beat ‘em all!
Enter Double Dragon Trilogy, a compilation specially optimized for mobiles and which includes all three installments of the beloved arcade series: Double Dragon, Double Dragon 2: The Revenge, and Double Dragon 3: The Rosetta Stone. The first one begins with Billy and his brother Jimmy, two martial arts experts, in a mission to rescue Billy's girlfriend, Marian, who’s been kidnapped by the Black Shadows Gang. All your favorite moves are here: punches, kicks, elbows, knees, head-butts and an assortment of not-exactly-street-legal weapons.

Review: They should have left the HUD alone but other than that it's a legit Arcade Port. The issues people are having with sound/gfx are mostly related to not having Adobe Flash/Shockwave installed/updated.

They have restored the missing Endings.

On the original arcade games there is TONS of massive slowdown, and that isn't present here so that's an improvement. I get some background stuttering but I have an old CPU/Motherboard and Monitor. It's a bit better at 75z and probably even better higher than that. I don't think it's an issue for everyone, but certainly some have agreed.

I love the Game select screen. I just really dig the Isometric pics they use. The title screens are gone but...I think this makes it ok for me.

Also, it's fullscreen stretched. On Mame it seems to have black borders even with Aspect Ratio off.
Good if you want Achievements/Cards/Multiplayer. 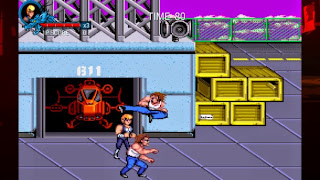