The Best of Rockstar Games

Through his 20 years with Rockstar games, AllPCGame's looks back on a select few of his past works


Introducing an interactive score, alongside the trademark radio to the GTA world is something that I view as a great achievement. The development was tough and frustrating as there was an army of

people working on it worldwide - but I never lost focus. I knew it was going to be special. Similarly to Red Dead Redemption, I wrote a concept interactive track for the score and then had to present Edgar Froese (Tangerine Dream) with my work. That was probably one of the most nerve-wracking things that I've ever done. There I was in the studio with this legend whose work I'd admired for decades and I'm saying things like "So if you could just write it like this and if you could do this part like that". Who the fck did I think I was!? But Edgar was nodding his head to the track and smiling, so I think I got away with it. It's a hell of a task getting any composer to write with the limitations that an interactive score applies to the whole process - luckily I got on great with Edgar and it all turned out well.

I wrote an original interactive concept piece for Red Dead Redemption-we used that as a foundation to build on. I took inspiration from the film The Proposition. It made sense for Woody Jackson and Billy Elm to record the score in their studio in LA - the style was something they could produce easily and they had access to the cream of the crop in terms of LA musicians and instruments - there's no way we could have produced that authentic Western sound in our Edinburgh studio.

The guys produced tons of tracks and I would strip them all back, mix and master each multi-track and build them back up as interactive stems. Looking back it was rather easy getting the score to complement the game - we weren't competing with a noisy city like GTA. In contrast Red Dead Redemption was a natural-sounding environment and so the music always came through well. I remember getting one of the first tracks back from Bill and Woody then hearing it in the game while riding a horse - it felt like I was in a movie with panoramic visuals.

During Manhunt I found myself sleeping all day and watching horror movies and writing tracks all night. For I didn't want anything orchestral in the score I wanted old analogue sounds with uneasy noises layered on top rather than a conventional game score. John Carpenter was a big inspiration for me with his minimalist approach to horror scores. It was also the first time we attempted an interactive score - that was quite groundbreaking at the time. 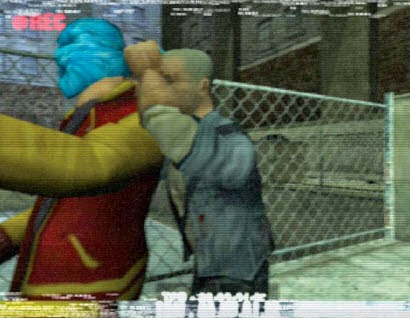 In terms of SFXI remember Allan Walker saying "Would you mind if I just quickly record stabbing someone, strangling them and breaking there neck"? I was the only one that had a recording booth at the time so I was privy to those recordings... we would get fresh fruit and punch the fuck out of it then use plastic bottles to get breaking bones by twisting them and then pitching it down. Allan would spend hours mixing it. then syncing it up to the animation. We're talking PS2 at the time so in my opinion it wasn't that graphic, therefore it was vital to make the SFX as gory as possible in order to make the whole game convincing.

The development of Vice City was more like a bunch of friends getting together to produce something magic. I only really wrote one radio track on VC for the Spanish station La Vida Es Una Lenteja - this turned out to be my most popular track; in terms of YouTube hits and downloads, its in the millions. I couldn't speak about Vice Vice City without mentioning Love First. You can take your

pick from any well-known metal band and relate it to Love Rst - surely it's pretty obvious where we got our inspiration? Apart from the fact, of course, that Love Fist all had broad Scottish accents - hilanous! I think it was originally Allan Walker and Leslie Benzies that came up with the idea of Love Fist. The plan was always to make the band as OTT as possible... we wrote and recorded the original Dangerous Bastard demo in Edinburgh. Leslie was on bass, drums and vocals with Allan on guitars. I was on vocals and production. I always preferred the demo version - it was a bit rough but it had the energy that the final polished version didn't have.
Email ThisBlogThis!Share to TwitterShare to Facebook