10 PC Games You Must Play

There are some games that have left an indelible mark on both the games industry as a whole and gamers in particular, and there are others that are so well respected that they are all but permanent fixtures on "The Best Games of All Time" lists.


The year is 2105. After being forced underground for decades, Speedball – the world’s most brutal sport – has resurfaced in order to reclaim its former glory. Fiercer than ever before, the sequel follows new team 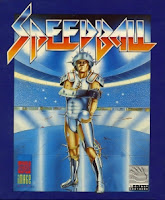 Brutal Deluxe as they work their way up a cutthroat ladder. Teams have expanded from five to nine players, all vying to control a solid steel ball – bouncing it off walls, pinball like  obstacles, and players skulls – in an attempt to score goals or rack up the most points. Between matches, players can be bought or sold, upgraded or benched, with individual stats heavily affecting each player’s in-game AI. Match soundscapes are completely diegetic in form: comprised entirely from the roar of the crowd or screams of tackled players – placing a sense of anticipation on every clink of the metal ball as it moves around the court. But most importantly, Speedball 2 is all too aware that it’s a game, not a simulation, creating an over the top experience that is still one of the best multiplayer titles out there – even if it was made over 20 years ago.

Fallout: New Vegas is a wonderful compromise, combining the accessibility and addictiveness of Fallout 3 with the hardcore sensibilities and depth of Fallouts 1 & 2. AZZZs trite as it sounds,

the truth is that this is a game with something for everyone. If you want an easy-to-play runand- gun adventure, all you gotta do is skip the dialogue and turn the difficulty down. But if you want a challenging role-playing game with a deep and rewarding narrative, then do just the opposite. The point is that you’ve got a choice. Few games offer that kind of flexibility. What really makes a F:NV a superior game to F3, though, is the quality of its dialogue and characterisation. Unlike their counterparts in the Capital Wasteland, the NPCs you encounter in the Mojave Desert are not just thinly veiled questkiosks. They are characters in the proper sense of the word, possessed of idiosyncratic views, motives, and mannerisms. They are charismatic and complex and – in some cases – darkly hilarious. Who could forget Fisto the sexbot? “Numbness will subside in several minutes,” he says – but trust us: he lies.

Aw c’mon… we don’t need to tell you about Doom, do we? It’s DOOM, for god’s sake. The game that pretty much invented first-person shooters. Yes, fine: stuff like Maze War and Ultima 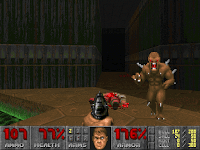 Underworld and Wolfenstein all came out before it, but it was Doom that propelled the FPS into mainstream consciousness, cementing it as the premier genre on PC for more than a decade. Doom was imps and pinkies and Barons of Hell and ARGH HOLY SHIT IT’S A CYBERDEMON RUN RUN RUN. It was the shotty and the chaingun and the glorious, screenclearing BFG turning a horde of screeching demons into harmless piles of viscera and goo. Doom was the shit – IS the shit, as fist-pumpingly gratifying today as it was 23 years ago. But you don’t need us to tell you this. You already know. But maybe you were looking for an excuse to fire it up again, maybe try out some of the new mods that are still being made for it? Well, here you go: have at it.

Lumines is bliss. Playing it – particularly with headphones on – is an experience comparable to contemplating a Zen koan. It sends you into a meditative trance, purging your mind of any concern that isn’t directly related to the arrangement of falling multicoloured blocks. In crass, earthly terms,

it’s a puzzle game a bit like Tetris: multicoloured blocks fall from the sky and your job is to arrange them into single-coloured squares. Unlike Tetris, though, Lumines features a soundtrack of top-shelf electronica that rhythmically regulates the action on-screen. A line – called the “timeline” – sweeps across the screen in tempo with the music, clearing away completed blocks. If there aren’t any blocks to clear, the timeline and music loop, reinforcing your success and failure and heightening the sensation of both. It’s a hypnotic, engrossing experience: the kind of thing you can lose hours to without even realising. And if that isn’t the definition of a great game, then what is?

When it comes to open world fantasy adventures, the Gothic series is criminally overlooked. It achieves so much, especially considering when it was released. Characters are free to grow however they like, with the ability to wield a vast array of weaponry alongside many forms of magic. Different world factions, such as dragon hunters, mages, and templars, make the world feel vibrant and alive while the choices you make have tangible rewards/consequences. Yet what makes this series so clever is that skill-point allocation isn’t purely about buffing – it is physically noticeable. Sword fighting, for instance, is a real-time mix of chaining the right moves together to block, parry or dodge, alongside four different directional attacks. Players may start off swinging their weapon awkwardly with stiff limbs but as they train their skills (yes, you actually have to find people skilled enough to teach you things – crazy right?) eventually find themselves spinning, pirouetting and slicing their enemies to shreds. The fact that development is far more organic than most titles, even by today’s standards, makes progressing through this fantasy world a truly rewarding experience.

Papers, Please is a grim, unpleasant game. It isn’t fun – it isn’t something you play to relax after a hard day at work. It is work. You are a checkpoint inspector working for the fictional but all-too-real totalitarian regime of Arstotzka. Your job is to inspect the paperwork of travellers attempting to cross the border and ensure everything’s up to snuff and on the up and up. Again, if this sounds like

soul-crushing bureaucratic gruntwork, it’s because it is soul-crushing bureaucratic gruntwork. Papers, Please is a poignant demonstration of what Hannah Arendt famously calls the “banality of evil”. It makes you a solitary cog in a vast unfeeling machine and challenges you to retain your humanity. Do you let the sick woman in to get life-saving medical treatment even though her passport is out of date? Do you risk losing a portion of your pay – which you need to feed your family – so that a husband and wife can reunite? A lot of games do moral gameplay, but Papers, Please is one of the very that does it well. It isn’t fun – it’s edifying. Which is exactly what good art bought to be.

StarWars: Knights of the Old Republic

In hindsight, it’s hard not to regard Knights of the Old Republic as a kind of prototype for Mass Effect. Both are space-opera RPGs that follow implausibly charismatic protagonists and their mixed-species entourage as they traipse from planet to planet in a bid to stop galaxy-ending evil. Both feature real-time combat that can be paused at whim, dichotomous morality systems, and a hub ship where all your companions stand around waiting for you to solve their personal problems. Both were directed by Casey Hudson and star Jennifer Hale and Raphael Sbarge. But of course the big difference between the two is KOTOR is freakin STAR WARS. It’s lightsabers and wookies and blasters that go pew pew pew. It’s Jedi and Sith and the Mos Eisley cantina music that gets stuck in your head for days. With The Force Awakens just around the corner, the urge to revisit this – the best Star Wars game ever made – is just too strong to ignore. And now that it’s available for pretty much every platform in the galaxy, including smartphones, you’d have to be a real poo-doo head not to give it one more go for old time’s sake. 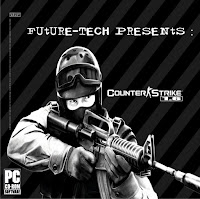 Beginning as a humble mod of the ever popular Half-Life, Counter- Strike quickly became known as the quintessential FPS multiplayer experience; a mouthful, for sure, but the game’s simplicity is what allows it be so successful. Two teams – terrorists and counter-terrorists – face off, each with their own arsenal of weaponry and the ability to expand these as rounds progress. Success is governed by eliminating the opposing team or controlling a map: whether it be through planting or disarming a bomb, rescuing or securing hostages, or meeting any other prerequisite that might be set. While these modes offered a distinctive goal, it was important that they remained simple, as things always came down to who could outshoot, outsmart and outlive opponents. True to its origins, Counter-Strike grew organically through modding, with new maps, skins and bots to keep players striving for the scratchy over-the-comms confirmation that their team wins. 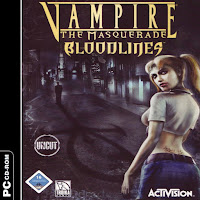 Depending on how you look at it, Bloodlines is either one of the best games ever made or a colossal turd. The writing is brilliant, that much is incontestable. Troika’s twisting narrative goes to the heart of what makes the World of Darkness appealing: manipulation, deceit, treachery – politics. Not politics in the grand sense: it’s more like office politics, petty and parochial. There are no big ideas here, no heroic contest of ideologies. There is simply greed and naked ambition. Which is great. The problem is that, sans patches, Bloodlines is an unfinished mess. For the first 20 hours or so, it’s not a huge deal, but after that... things take a turn for the worse. Creative quests and thoughtful level design give way to tedious combat slogs through endless corridors of respawning goons. There are boss fights. Stupid, awful, frustrating boss fights. Bugs become more frequent and more serious. Some are game-breaking. In fact, there is one bug that is both game-breaking AND nearly unavoidable. So: if you’re gonna play, make sure to get the unofficial patches first. You’ll be glad you did.


Rise of the Dragon 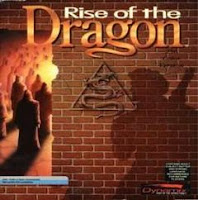 Do androids dream of electric sheep? Does William “Blade” Hunter dream of Rick Deckard? The year is 2053, LA is a gritty cyberpunk hell full of low-lifes, two bit thugs and hermits that preach doom on the streets. The mayor’s rebellious daughter has OD’d on a new drug – MZT – and Blade , ex-cop turned private dick, is on the case. This point and click adventure puts players under the timer, with decision and indecision sending them towards a vast number of possible outcomes, most of which are extremely unpleasant for the gritty detective. Hunter must work through a number of mysteries, including the riddle of his struggling relationship with girlfriend Karyn, all leading up to the mysterious rise of the so called “Dragon”. It’s hard to say which version you should play, as the Sega CD’s additional voice acting creates some heady noir tones, but it also has a reduced colour palate, lending everything a green tinge. What’s more, scenes like a sultry french kiss and the hint of intercourse had to be removed, being considered too “explicit” for sensitive console gamers. Ooh la la!
Email ThisBlogThis!Share to TwitterShare to Facebook