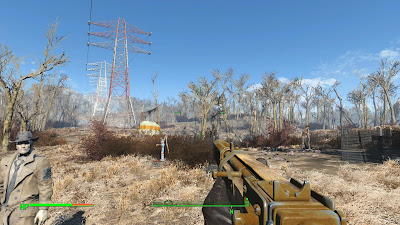 VAULT 75
Make sure you search every school you find. One has a secret vault underneath, the pretence being it was to save the children and their parents (if they could afford it). The truth is far more horrifying, even for this series, and that’s really saying something.
-
TROUBLE BREWIN’
It’s not all doom and gloom in the wasteland, as this charming adventure proves. Salvage a beer-brewing robot, while wondering if Bethesda come up with the pun first, then write the quest after. We’re not judging. That’s how 90% of OXM is brewed.
-
OUT OF THE FIRE
Stop impressionable youngster Jake from joining sinister Raider gang The Forged. Seriously, these guys are truly evil. Feeding-people-eyes-forsleeping- on-their-shift kind of evil.
-
HERE KITTY, KITTY
Rescue Erin’s cat. Look, you’re going to commit some truly horrible sins in the wasteland. The least you can do is return this lost kitty. Think of your soul.


JUNK JET
At last! A weapon that fires all those useless rusty tin cans we’re always accidentally picking up.
Will launch any junk loaded into it and the longer you hold down the trigger, the more powerful the impact. Means it’s now possible to defeat a shotgun wielding raider with a pair of safety scissors.

SYRINGER RIFLE
Craft poisons at chemistry benches, then fire them into your enemies. Highlights include one that makes them bleed out for an agonising 30 seconds, or a shot that makes them think you’ve vanished into thin air. You know, just like people do all the time. Idiots.


ELECTRIFIED SWORD
Bring a big knife to a gunfight and the Super Mutants will rightfully giggle as they minigun you to
shreds. Burn off their laughing gobs by crafting an electrified blade – it’s the closest you’ll get to wielding a lightsaber outside of Battlefront.

ANY LASER WEAPON
Does disintegrating an enemy into red, steaming particles ever get old? No. No it does not.