Best PC games that can run on a 512mb graphics card 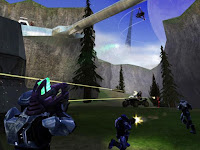 While Goldeneye might be credited with popularising the console first-person shooter, Bungie’s Xbox launch title was the first to truly nail it, launching as an astoundingly fully-formed implementation of almost everything we associate with the form to this day. Such was its influence that Halo’s feature list reads like an inventory of modern FPS trends: recharging shields, trigger-mapped grenades, the two-weapon limit, and gun-butt melee attacks. Halo pioneered them all, along with precise twin-stick controls and a tremendous roster of pilotable vehicles. And as if all that wasn’t enough, Halo can also be credited with driving the success of Microsoft’s console ambitions, providing the gaming giant with a flagship franchise that endures to this day. To think it was originally planned as an RTS…

From its set-piece-driven campaign to a silky 60fps multiplayer that constantly rewarded players with perks and rank-ups, you can thank this classic for shaping almost every multiplayer shooter – and any non-shooters – ever since.

DEus Ex
Today it seems every game is a mongrel, and first-person titles in particular are often hybrid blends of RPG levelling and open-world influences. It was this cyberpunk shooter that set the precedent for today’s creative cross-breeds.

half-lifE 2
“Shooters, meet physics” – that’s what Valve said with Half-Life 2. It gave every body and object physical propeties, meaning you could fling saw blades with a Gravity Gun and, to a less violent end, play on some swings. At a time when other FPS games were inert movie sets, this was a world you could influence.

There’s never been a gaming phenomenon like Minecraft. From bedroom project to global sensation, the blocky builder has truly taken the world by storm, and established itself as the defining game of a whole new generation – not just to play, but even to watch, with so much of YouTube dedicated to it that it’s putting cute cats out of business. Procedural generation, crafting, exploration, survival, tools for allowing players to create their own content – Minecraft has established these concepts in gaming more strongly than ever before. Microsoft didn’t shell out $2.5 billion for nothing – it’s nabbed a share of the future.

Wolfenstein 3D may have laid the groundwork, but Doom was the game that brought the first-person shooter firmly into the mainstream, establishing the genre not only for players, but for money-minded publishers. And while the first-person perspective may be practically ubiquitous in games today, it’s easy to forget that there was a time when practically every FPS that came to market was dismissively labelled as a ‘Doom clone’. How fortunate, then, that the game that galvanized parsimonious publishers seeking return on investment should have been such an excellent, energetic exercise in supremely satisfying shooting.
Email ThisBlogThis!Share to TwitterShare to Facebook