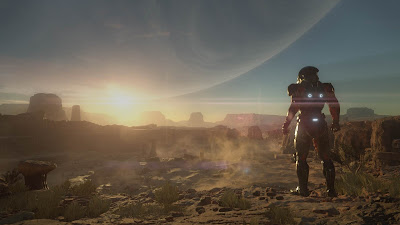 The return of the space cowboy, in a markedly different guise


The original trilogy may have had a murky corner or two. but its depiction of the Milky Way was mostly sleek lines, reflective surfaces, and tasteful smooching. Bioware's follow-up. however, looks set to swap all that pristine futurism in favour of the grounded muckiness of a sci-fi Western, switching out the militaristic Shepard for an unnamed space cowboy.
The current hot lead in fan speculation suggests that Andromeda will task players with finding a new home for humanity and her allies, striking out for unknown worlds as part of a Pathfinder' expedition That premise suggests that Bioware is returning to Mass Effect's roots, placing exploration at the heart of a series that's progressively become more about waist-high walls than alien architecture.

The return of the Mako, confirmed in Andromeda's very first trailer, is one sign of this realignment of priorities. Another is the rumoured ability to establish colonies on the farflung worlds you discover, providing much-needed settlements for human refugees as well as granting resource bonuses to the Pathfinder protagonist and their crew.

The maintenance and defence of these outposts will prove fundamental to the success of your mission, and you'll be able to fend off opportunistic raiders either on your own or with a clutch of multiplayer allies. But should you decide you're too important to act as space sheriff to a bunch of mewling townsfolk, you can always choose to deploy a Strike Team instead, managing your Al enforcers in a similar fashion to Dragon Age: Inquisition's war table mechanic.

All of which sounds like the most radical shakeup yet for a series that's been around - and worshipped - for almost a decade. But so long as we can still French kiss an extraterrestrial, we'll know it's still very much a Mass Effect game.
Email ThisBlogThis!Share to TwitterShare to Facebook