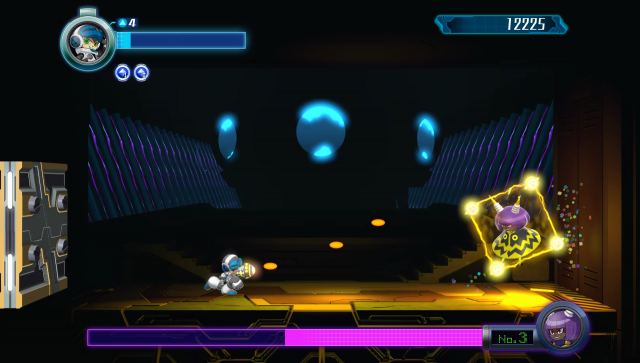 85/100 - Bit Cultures
You control Mighty No. 9, whose real name is Beck, and you and your creator, William White, are trying to figure out the cause of the malfunctions of your siblings, Mighties No. 1-8. For those people who have already “reviewed” (and I use that term loosely here) this game, they seem to have completely missed something. Inafune was not allowed to put the ideas he wanted into the Mega Man games.
Read full review

75/100 - Entertainment Buddha
Mighty No. 9 brought back the platforming genre only with it's own twists and turns. The tropes of the 8 bosses and absorbing their skills is still here, but it is the new dash mechanic and difficult platforming gameplay that brings Mighty No. 9 to the light. Move on over blue bomber, the blue dasher is coming in hot.
Read full review

60/100 - Hey Poor Player
It’s kind of a letdown that Mighty No. 9 didn’t live up to its title. Then again, Sorta-Good No. 9 doesn’t really have a nice ring to it.
Read full review

51/100 - Link-Cable
After more than two years of anticipation and patiently waiting for its release, Mighty No. 9 fails to recapture the legacy of what was once one of the best franchises in gaming. From its bland presentation to its technical issues as well as its clunky controls that left a sour taste for those who were expecting the return of Mega Man and those who helped backed this project into reality. For a game to have so much promise, Mighty No. 9 will only be a cruel reminder of the other side of Kickstarter and a disappointment for gamers everywhere.
Read full story


50/100 - Capsule Computers
When Keiji Inafune announced that he was holding a Kickstarter for a game that many Mega Man fans had been hoping to see the likes of for many years that project managed to set records at the time. Now after plenty of waiting that left many anxious as to whether Mighty No. 9 would ever actually be released, the game has arrived. Now the question remains, is Mighty No. 9 a fitting replacement for a series that many have fond memories of or does it fail to measure up?
Read full review

50/100 - Frugal Gaming
You can imagine how excited I was when I heard that Keiji Inafune (one of the creators behind Mega Man) was working on a game that was going to be a spiritual successor to the Mega Man game I loved so much.
Read full review

45/100 - The Koalition
Mighty No. 9 has finally been released and it is anything but 'mighty.' Find out why this is one of the more disappointing games released this year in our full review.
Read full review

40/100 - COG
Mighty No. 9 attempts to polish up the platforming genre but leaves us shaking our heads in this missed opportunity for reinvigorated fun.
Read full review

40/100 - Joystickin
Nostagia is a weird thing. For years fans have been frothing at the mouth at the idea of a getting another Mega Man game. When Keiji Inafune and a couple of ex-Mega Man devs went to Kickstarter to give you the Mega Man game Capcom refused to make, or so we thought. After playing through Mighty No. 9, maybe Capcom was onto something by leaving the beloved franchise in the past.
Read full review

40/100 - Starburst Magazine
For years, critics and analysts have been predicting the crowd-funding bubble finally bursting thanks to one high-profile failure too many. Thanks to the likes of Might No. 9, it’s not hard to see why. This should have been a simple task to accomplish – develop a successor to the Mega Man series bereft of Capcom’s interference, stick to what worked a dozen times before, and make the fans happy. What we ended up with were lengthy delays, drama and a cheap platformer any competent indie dev could have squirted out in a few months.
Read full review

40/100 - WCCFtech
Mighty No. 9 was designed to be a spiritual successor to Mega Man. If any of that spirit was ever here, it's long since decayed. The game is incredibly frustrating, suffers from bad design choices throughout and offers only middling enjoyment.
Read full review