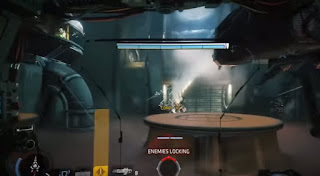 The Entertainment Software Rating Board has revealed its rating summary for the upcoming Titanfall 2.

Rating Summary:
This is a first-person shooter in which players assume the role of a militia pilot through missions on an alien planet. As players traverse various battlefields, they use machine guns, shotguns, grenades, rockets launchers, and mechanical battle armor (Titans) to destroy robot sentries and kill enemy soldiers. Battles are frenetic and are accompanied by realistic gunfire, radio chatter, and large explosions. Some weapons cause enemies to explode into large sprays of blood and chunks of flesh; large blood stains will sometimes appear on walls and floors. The word “sh*t” is heard in the dialogue.

Titanfall 2 is coming out on the 28th of October for the PlayStation 4, Xbox One and PC platforms in the North American region.
Email ThisBlogThis!Share to TwitterShare to Facebook