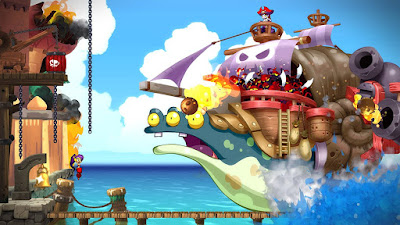 Review: Really, the series as a whole is nothing but a group of great platformers, from the original (and expensive as all heck) all the way to this game here. This game just adds to that statement.
First of all, the first thing you'll notice is that the graphics just look great. Up to this point, the games usually used pixel art, whether it was due to the hardware or just for cosmetic reasons, and they were pretty good graphics at that, but now they decided to go with 2D sprites in 3D environments approach, much like the Ducktales Remastered game, and it's beautifully done. The sprites are well drawn, and the levels are bright and colorful. It's pretty much the prettiest game in the whole series.

Music is also no slouch either. There are a few familiar tracks for those that played any of the games before, and the new tracks are also great. Heck, with the song in the first level "Dance Though the Fire," I would've bought the Risky Beats Edition just because of it alone, not to mention that it makes for a great theme song. So, pretty much, the Risky Beats Edition is worth it.

Now for gameplay, it's still the game formula with some changes. The game is 2.5D sudo-Metroidvania, that meaning that while the levels are pretty big and promote exploration, you'll have to choose the levels instead of having to travel to them like in the original game and Risky's Revenge, so it's a bit like the Pirate's Curse in that regard. You will need to go back to these levels multiple times throughout the game, so it can feel a bit repetitive, so if you hate going through the same levels again and again, this game won't be for you. With that said, the levels are still fun to play through, and the folks at WayForward has packed a good bit into these levels. Another change is the transformation system, and it's the best system the series has by far. In the original game, which was on the GameBoy Color, it was a bit clunky, as it was essentially a rhythm game where you have to put in a specific combination of buttons. Trust me, while the original was a good game, the transformation dances were tedious to pull off. Risky's Revenge, on the DSi and now on most platforms, fixed this, but it was a bit slow waiting for a specific dance, and Pirate's Curse didn't even have transformation dances at all, instead opting for pirate item abilities. In this game, it's essentially like a combination of the two early games, and it's actually pretty quick to use, especially after buying the Metronome. You get a total of twelve transformations, and they cycle through four at a time, and yet, as long as you know the right direction to push, it's just a second or two to do a transformation. Other than that, it's still the pretty tight hair-whipping exploration platformer that the series has always been, and trust me, it has always been a good game series.

For returning fans of the series, it's an obvious buy, but for new fans, I would recommend the whole series in general. The games, since all the games are available digitally, they're easy to get, as long as you got a 3DS for the original game. In fact, I'm surprised the original game wasn't remade for a larger audience. That said, this game is an example of a Kickstarted game gone right, and it's an easy game to recommend.
Rating: 85/100
Download Trainer