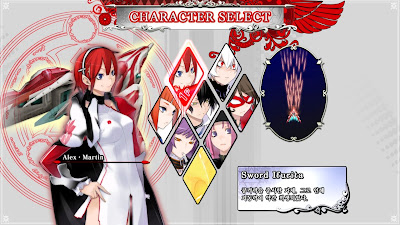 Review: Feels so much like Raiden III/IV in an alternate reality but with waifu and a little different shooting system. You have your normal shot as well as 3 unique "elemental" shots, special and a bomb. I found it to be a very intersting system, if you use any of your elemental shots, your meter goes down, but if you leave it, it recharges.
I hightly recommend watching the tutorial, its not just your simple shoot and dodge SHMUP. The first SHMUP I have ever played that I played that I prefer an XBOX controller over my arcade fight stick, makes use of 6 buttons. It has a certain amount of fan service, but its not too bad, I didn't feel dirty after doing a "shame-break". But if this is still too much for you, I suggest turning the CG off altogether in the settings. Or even partially. I personally like the visual novel approach within Arcade games, the Guilty Gear and BlazBue franchises do an excellent job of it in their 2D fighters, nice to see the same sort of thing coming to SHMUPS. This is a very linear story driven game, other than each of your different pilots see it from their perspective. There aren't many levels or many modes, but since each character is so different and has their own story to tell, you will find yourelf wanting to play through each character in each different mode. Even if only to unlock all the wallpapers. All of which are tastefully done, the odd PG17 maybe, so don't be expecting anything more. Although this feels more like a $20USD title to me, $25 isn't bad either. To me personally its like paying the same $15 as Raiden IV then an extra $10 for the waifu.

A little side note, the game uses OpenGL, will we be seeing in on STEAM OS? Yes it says DX11 in the system requirements, but not the case according to MSI Afterburner. Not to mention you could probably run this game on a potatoe.
Download Game Trainer
Gameplay Trailer