As a general rule of thumb, technical demonstrations should always be approached with caution. It isn’t that developers are ever purposefully disingenuous, it’s just that a development cycle is  essentially a process of managing steadily shifting parameters; ideas and priorities can change, while systems and mechanics can grow or fade over time. But, on a rare occasion, it’s OK to just be impressed by what you’re seeing in front of you while praying that the final product can somehow maintain the same momentum.
A Plague Tale: Innocence is over a year away from release. The segment we saw might not even be in the final game, but its central starring game system will be, and that’s enough to get excited about – dynamic rats. Yep, from the developers of Ratatouille comes a game where you are forced to avoid and utilise swarms of gorgeously grotesque plague rats that have essentially overwhelmed the streets of an unnamed city in medieval France.

The central premise sees two siblings attempting to reconvene with their parents and escape the city alive. Already, even at this early stage, there is a clear focus on the relationship between the two  being exploited for emotional narrative drive and creating ingenious puzzles to overcome – not unlike that of Brothers: A Tale Of Two Sons, sans the control system of course. It's a nice touch with plenty of promise, but it’s the rats that really hold the attention. 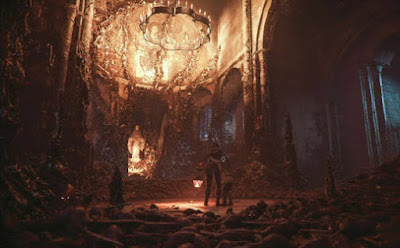 The rats are attracted to flesh and shadows, terrified of the light. The kids are forced to use the  environment (or a small slingshot) to create patches of light to enable for unchallenged movement, in the form of destroying lanterns and torches carried by hostile Inquisitors. It’s an admittedly tense
affair, and unflinchingly grim too; enemies are torn apart, screaming as you plunge them into darkness, using the distraction to quickly sneak past a flood of scurrying rats.

It’s too early to know how A Plague Tale will turn out, but its central premise has us hooked. It’s fluid, reactive and an intuitive solution to spicing up what could be otherwise fairly conventional light-based puzzles. Asobo has set itself a 2018 window – we can’t wait to see what it does within it.