Ed Revealed as the Next Street Fighter V Season 2 DLC Character by Accident?

Looks like Capcom unintentionally revealed Ed as the next Street Fighter V Season 2 DLC character. Or it may have been a marketing stunt, who knows. Street Fighter V – Season 2 Character Pass on PlayStation Store listed Akuma, Kolin, and Ed as the first three DLC characters in Season 2. Akuma and Kolin were already introduced, but Ed is a novelty.It is probably an honest mistake, since the description now just says “Street Fighter V – Season 2 Character Pass”. You can check the picture before the coverup below, courtesy of Shoryuken. 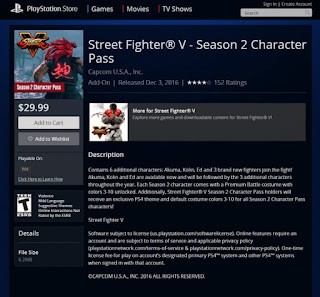 Ed made an entry in the series as non-playable character in Rose’s Street Fighter IV ending, appearing again in Balrog’s Super Street Fighter IV prologue and ending. He was then refereed as Bandaged Boy. The most recent time we have seen him is in SFV, being Balrog’s partner in crime.

The next Street Fighter V Season 2 DLC character reveal was recently delayed, alongside with balance changes and CFN update. Now, we expect Capcom to jump ahead of this, and give some official announcement. Stay tuned for more infos.

In other Street Fighter V related news, the Capcom Pro Tour 2017 DLC content details and pricing were revealed. There will be plenty of stuff you can get your hands on including Capcom Cup Collection Costumes for Ryu and Ken, Champion’s Choice Costume and new Capcom Pro Tour Stage. Sounds promising right?
Email ThisBlogThis!Share to TwitterShare to Facebook