Pros:
+ Fun, Satisfying Combat. Very Fast Paced.
+ Nice Artstyle.
+ TONS of Destrucable Object. Make combat even more satisfying.
+- Not As Brutal as Hotline Miami, Could use some blood violence to make the game more satisfying. no need to go hotline miami level but atleast some red stuff will help the game alot.
+- Not my kind of soundtrack. it feel too generic. so i turn off and open HM2 soundtrack instead.
+- Story was somewhat lackluster. but not the focus of this game anyway.

Cons:
- Can't Use gun. One of the most dissappointing aspect of the game. dear developer. if you read this, please add this feature in the game. don't keep it and use in sequel or dlc.
- Too Easy. The enemy took way too long to aim and shoot. i know the player have teleportation but it could use a much faster enemy AI reaction.
- Boring Level Design. Feel like i'm in same room with same texture but different layout the entire game .some room like last room in chapter 2 was ridiculous and make no sense.
- Artifical Difficulty, Half of the game so far i die because laser. not because enemy kill me. and as soon as you figure out how to dodge laser. it become easy again.

if you're looking for more of hotline miami action. this MIGHT be the game for you. (i said might, due to too easy difficulty i can't really say it's a must buy) but if you looking for a game that let you be a badass. then it's a buy. 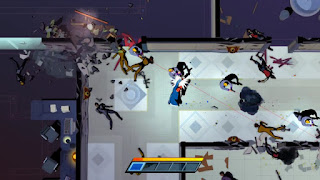 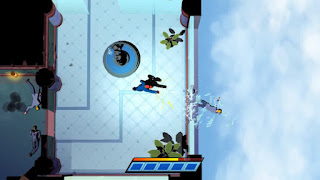 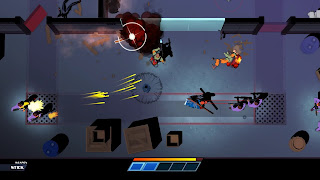