The Best Karting Games for PC, Snes, N64, Amiga and Wii U

Kart racers are some of the most fun you can have on four wheels. Typically based around intense multiplayer battles and featuring a colourful collections of characters (who often have unique abilities and different stats) they represent fantastic fun for the vast majority of gamers and always go down well in multiplayer sessions. 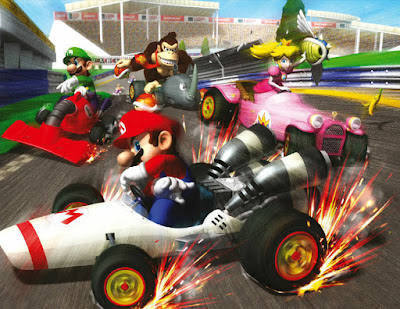 While it wasn’t the first karting game to appear, Nintendo’s Super Mario Kart nevertheless kick-started a template that many other games would and continue to emulate. In short it started everything. With so many colourful characters appear in Nintendo’s classic game, it’s perhaps inevitable that so many other karting games would go on to use licences, from  Looney Toons and Star Wars, to The Muppets and M&Ms. Popular mascots like Crash Bandicoot and Sonic The Hedgehog have also tried their luck, with varying degrees of success. Join us then as we look at the many Mario Kart games that have evolved the genre and the notable successes and  failures that followed in Super Mario Kart’s speedy wake.
WACKY WHEELS PC - 1994

The success of Super Mario Kart meant that many copycat clones quickly followed. One of the most interesting was this early effort from Beavis Soft, which featured escaped zoo animals and collectibles in the form of bombs and hedgehogs. Originally distributed as shareware, it was rereleased on Steam in 2015 and received a sequel the following year.

Everything about modern karting games can be found in this spectacular debut. Its motley selection of classic Mario characters are varied and cater to different playing styles, while the tracks are 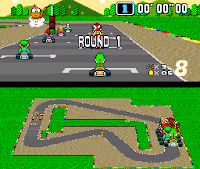 extremely well designed and offer clever shortcuts for the skilled player. Super Mario Kart introduced a large number of defensive and offensive items, which have been copied ever since and features different difficulty classes in the form of 50, 100 and 150cc groups. While its multiplayer and Battle Mode only catered for two players, the incredible track design meant many spent ages in Time Trial mode, desperately trying to shave seconds off their high scores, thanks to the clever power-sliding and hopping mechanics the game featured. It might not have been the first karting game, but it laid the groundwork for everything that followed.
XTREME RACING AMIGA - 1995

While it only ran on AGA systems like the Amiga 1200 and 4000, and featured standard looking cars, this was still one of the best examples of the genre on Amiga, beating Street Racer by a good two

ears. It features Battle Modes, offensive pick-ups and 12 impressive looking tracks to race across, but it lacked the personality of Nintendo’s racer and Street Racer. Its advantage compared to similar games was that up to 8 players could compete at once on two linked Amigas.
DIDDY KONG RACING N64 - 1997

While it’s perhaps not as polished as Nintendo’s racer, it was far more imaginative, with an amazing Adventure Mode that featured frantic races against giant bosses and saw the player having to collect a

series of balloons to unlock new areas. It was also notable for adding brand new vehicles in the form of hovercrafts and airplanes, which dramatically altered the routes you could take on certain levels. Originally intended as a sequel to Rare’s earlier Pro-Am games, Rare added Diddy Kong for stronger brand awareness. While a planned sequel was cancelled for the GameCube, an enhanced update with improved graphics and the ability to create racetracks was released for the DS in 2007.
MARIO KART 8 WII U - 2014

Cross Mario Kart with Nintendo’s long forgotten F-Zero series and this was the result. It’s an

excellent addition to the series thanks to its anti-gravity sections that let Mario and company race  across walls and ceilings, which greatly opened up its gameplay. It had the strongest online  functionality of any Mario Kart to date and was impressively bolstered by some incredible DLC that added 16 additional tracks and six more characters.
Email ThisBlogThis!Share to TwitterShare to Facebook